After almost two months of traumatic homelessness Travelstripe is pleased to be rehoused in a new  corner of the blogosphere . 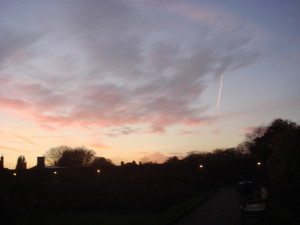 Before I resume  where I left off, on the glorious Greek Riviera, I would  like to devote a post to defining the travelstripe.

What exactly is a travelstripe? I must confess, until seven years ago, when it was suggested to me as a possible domain name, I’d never heard the word.  I must confess that I wasn’t really terribly enamoured of it. It seemed an empty, meaningless tag, without depth, history or associations. It bothered me more than a bit.

After while, travelstripe  became my growing collection of writings. I became travelstripe and travelstripe became me.  I had grown into travelstripe. But still, I felt a niggling need to find a meaning for the word – some thing or notion that could define it.

At last, one early summer evening, in the rose garden at Hampton Court Palace there it was, etched across the sky, a trail of white, left by a plane heading west to the horizon – a travelstripe.