Budapest’s Great Synagogue, which stands on the corner of Museum Korut and Racoczi Ut, was built in the 1850s by the Viennese architect, Lugwig Forster. A huge, ornate turreted construction, it is a testament to the large, thriving community that existed in Budapest in the 19th century. A museum in front of the building shows Jewish life as it used to be before the Holocaust. Behind it is a memorial, a metal weeping willow, its leaves inscribed with the names of those who died. 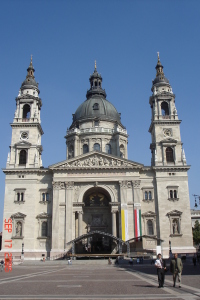 Majestic St Stephens Basilica, is one of the masterpieces of the architect Moklos Ybl. It was begun in 1851 and finished between 1873 and 1905 by the architect Moklos Ybl. The mosaics in its giant 96 metre dome are by Karoly Lotz and the figure of St Stephen on the high altar is by Alojos Strobl. The church treasury is home to one of the most precious relics of the Catholic faith – one of  Saint’s Stephen’s mummified hands.