Less than an hour from Heraklion lie the ruins of Gortys. Built in the first century BC, when Crete became part of the mighty Roman Empire, it was, at the time, the island’s capital city, with a population of over 200,000 people. 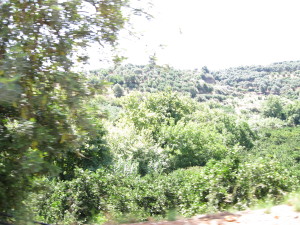 It is clear from the Roman  ruins at Gortys, that this was no mere outpost, but a rich and sophisticated city, with a grand praetorium or Governor’s residence,  temples, including a Nymphaeon dedicated solely to the worship of nymphs and , of course, an amphitheatre.

The most important find, here, though is the Code of Gortys. Inscribed on the curved walls of the ancient town’s auditorium and able to be read by all citizens, the Code outlines regulations on family, moral, inheritance and political issues. Of the original 640 lines, 605 are still visible. The Code of Gortys was quoted in Plato’s Laws and is the foundation of modern, western law.

Roman rule on Crete was relatively short lived and not long into the first century AD, Rome fell and Crete with it, leaving the way clear for another power to seize and occupy this lovely land.