Prague’s glorious years, as the capital of an independent Czechoslovakia, came to a sudden and sorry halt in 1939.

In a misguided attempt to avert World War II, the powers of Europe and Great Britain, without Czech consultation, ceded Czechoslovakia to Germany. The British Prime Minister proclaimed the move “Peace with honour” while the Czechs dubbed the decision “about us without us”. Germany, which had laid claim to Czechoslovakia because of its strong German associations, occupied Prague on March 15, 1939 and the country became a corridor for the Nazis’ relentless march through Eastern Europe.

During the occupation, Czech citizens suffered abominably. Prime Minister Alois Elias was murdered, along with many other politicians and academics. Thousands were incarcerated. Prague’s Jewish community was decimated. Those who had not already fled the city were sent to the infamous Theresianstadt labour camp or death camps in Germany. Josefov became a ghost town, carefully preserved by the Germans as an example of how Jewish people had once lived. When all fighting finally ceased on May 12, 1945, 270,000 Czech citizens were dead, including 77, 297Jews whose names are inscribed on the walls of Prague’s Pinkas Synogue.

Although the German occupation had spared Prague the devastations of a blitzkrieg, the bombardments during the liberation destroyed parts of the city. A vast square of lawn, with an oddly out of place modern sculpture, at the foot of Prague Castle Hill, marks the site where and American bomb landed on February 14, 1945, killing 700 people and injuring 1200.

Mercifully, however, most of Prague’s beautiful cityscape survived the war intact.

The end of the 19th century and the first decade of the 20th century were a time of great growth and prosperity for Prague.

As part of the Austro-Hungarian Empire, the city was transforming into a large modern European metropolis. The peaceful co-existence of Jews, Germans and Czechs contributed to an environment where both industry and culture flourished. Businesses and factories sprang up, along with grand streets, beautiful shops and elegant hotels. The suburbs burgeoned.

The Fine Arts blossomed and artists like pre-Raphaelite painter Mucha, became leaders in a world-wide movement. While many of the new buildings followed the Art Nouveau style of the Parisian Belle Epoque which was colonising European cities, an original Czech Cubist architecture was emerging too.

It was an age of visionary rule too. Francis Ferdinand d’Este who was a descendent of the Jagellon, Luxembourg and Premyslovic Dynasties, had succeeded the Emperor Francis Josef. He was married to Czech aristocrat Sophie Von Chotek and the couple lived at Konopiste Castle near Prague. Francis Ferdinand was a proponent of the expansion of the Dual Monarchy into an Austrian-Hungarian-Czech triple Monarchy. However his plans were cut short when he and Queen Sophie were assassinated by Hungarian student, Gabriel Princeps in Sarajevo on June 28, 1914. This incident was the catalyst for the commencement of World War I.

At the end of the War the Austro-Hungarian Empire was dissolved and Czechoslovakia was created with Prague as its capital. Prague Castle became the seat of the first president, Thomas Garrigue Masaryk.

The transformation into a big, modern, industrial city continued. In 1920 the Law of Greater Prague of 1920 expanded the city and in 1922 it incorporated several neighbouring towns and citizens. By 1930, the population had reached 850,000.

Prague’s prosperity endured, even through the Great Depression of the 1930s. The development of Czech Cubist Architecture, interrupted by the War, resumed and soon the cityscape featured the unique and impressive Functionalist buildings which were to distinguish it. Prague’s architecture had earned its place among the European greats and the city itself was one of the most beautiful and prosperous in Europe. 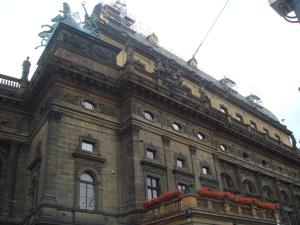 The Industrial Revolution began. Its effect on Prague was enormous. Profiting from the proximity to coal mines and ironworks, factories proliferated outside the fortified city. People flooded in from the countryside and suburbs mushroomed on the city’s outskirts. By 1837, the population had reached 100,000. In 1845 the first railway connection between Vienna and Prague was established, opening the floodgates for products and people. In 1850, the Jewish town of Joseph was finally added to Prague’s historical centre.  The fortifications between the Old and New Towns were demolished, the fortress moat was filled and a new promenade road snaked around the city. An embankment with Neo-Renaissance style public buildings was established alongside the Vltava River. In 1874 most of the Baroque fortifications and their bastions were dismantled.

The National Revival continued. Czech institutions were established to celebrate the Czech history and culture: the National Theatre opened in 1868 and the National Museum in 1890.In the following years the Czech Nationalist movement began to rise until it gained the majority in the town council in 1861.

In 1867 the Emperor Francis Josef I established the Austro Hungarian Dual Monarchy of the Austrian Empire and the Kingdom of Hungary. Once again Bohemia was part of a larger, stronger entity. Despite this, Czech Nationalism was strong. It continued to grow and to ready itself for its time.