It’s another morning of sharp, contrasting blue, yellow and white but the snow has peeled back further on patches of bright grass and dark brown soil and there’s a fine, barely visible dust of palest green on the branches of the trees.

Today I take a tour bus from beside the huge red-brick Rathus or Town Hall, to see some of the parks and museums of outlying Oslo. Oslo has a plethora of magnificent museums and fascinating attractions. It’s big ask to see and absorb them all in just one visit, let alone just one day, but that’s all I have left of my stay in Oslo, so I set off armed with camera, notebook and a large dose of determination. The tour begins at Vigeland Sculpture Park. 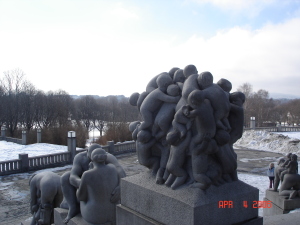 Oslo is a city of sculptures – people, animals, ancient ship-parts, abstract plinths, obelisks and stone chunks – they’re everywhere. They hide behind bushes in Karl Johan’s central garden, stare out over the fjiord from Aker Brygge, crouch on the hillside in the park by the palace and guard every room of the National Art Gallery – it’s a sculpture-lover’s dream.  But the park designed by Gustav Vigeland and peopled with over 200 of his statues, is sculpture paradise.

At the gate of Vigeland Sculpture Park our guide, a statuesque figure herself, with hair like iron filings, the stance of a solid stone block, a concrete-coloured military great-coat and a flinty expression, explains the rules

“When I am talking, you are silent”

Who could speak anyway? We follow her, dumb-struck and awe-struck, through rows of restlessly flexing, twisting, leaping, thrusting, crouching, clutching, clinging, embracing bronze, granite and cast iron humanity. There are old men and women with expressions of despair and hopelessness, ecstatic lovers, anguished parents, bereft-looking babies, rebellious youths, playful children, all individual and perfect in every detail. They’re knotted together in groups and bound together in pairs. They’re tossed on top of one another in bunches and clusters. They sit back to back and lie front to front. They stalk off alone. They stand in splendid isolation.

Here, at Vigeland park, art imitates life to perfection. The eloquence in the attitudes of these stone  bodies and the expressions in these stone faces is both moving and unsettling. Most of all it’s unforgettable

Vigeland Park is Norway’s most famous and popular attraction. Over 1 million people visit it each year.

The spring sunsets in Norway are long, slow and spectacular, starting with a fade down from the brilliant blue, bright yellow and vivid white of the day, into subdued grey, subtle orange and soft pink. The contours of the forests and coastline blur, and mist, like cotton wool, gathers in the dips and folds of the hills.

This evening I am invited to dine at Holmenkollen Park Hotel,  just below the former Winter Olympics venue which is now a ski park and museum. The restaurant’s boast, “Closer to heaven you cannot get” is perfectly true I think, as, sipping on a Jarlsberg, I watch the light fade over the hills below and the fjiord beyond.

Dinner consists of seven courses of Norwegian delicacies, each punctuated by a palate cleansing sorbet. The salmon is sensational, and so fresh I have to grapple with disturbing images of the delicate pink fish hurling itself onward and upward through icy waterfalls. The glazed pork main is good too but not good enough to conjure up pictures of fleet, cloven feet dashing through the forest (thank goodness!) The piece de resistance, however, is dessert – a beautiful little berry tart – a work of art for both eye and palate.

After dinner I’m ready to check out a little of Oslo’s night-life. Norwegians enjoy a drink and a party and in Oslo there are countless bars and clubs of every imaginable kind. Beer is the Norwegian drink of choice and many clubs serve a huge variety – one as many as one hundred and thirty two! Because alcohol is subject to heavy taxes, many Norwegians begin their evening with a Vorspeil, a sort of at-home, drinking party before the night begins. This might explain why so many patrons of the bars I visit are already in varying states of inebriation, from tipsy to blotto. (Not that I ‘m exactly judge-like after the numerous wines that have accompanied those seven courses!)

I begin my bar tour at Onkel Donald, a cafe/bar/pub/ restaurant, on Universitetgaten, a little side street off Karl Johan’s gate and just round the corner from the Grand Hotel. Its spacious rooms boom with the latest hits, both indigenous and exotic. I retreat to a corner with another Jarlsberg, to observe/ test Onkel Donald’s reputation as a pick-up joint.

There’s a tap on my shoulder. I look up into the bearded face of a Viking giant.

“Would you mind guarding my beer?” he asks, planting a tankard on my table.

Before I can answer he plunges into the crowd, leaving me to puzzle over the practice and responsibilities of beer guarding. I gather from his lengthy, confused and repetitious explanation, when he returns, that alcohol is so expensive in Norway, that an unguarded beer is certain prey. When he pokes me in the chest and slurs,

I begin to think that the wise beer guard would have tipped his tankard into the nearest pot plant, or given it to the cute young back-packer counting his coins at the bar. !”

Making my excuses, I head down the street to John’s Bar for a bit of a dance. The music is eighties Retro (Abba! Choice!) and the crowd, although described as “neither stylish nor fashionable’, is friendly. Besides they’re dancing up a storm. I’m feeling right at home as I shoulder my way onto the floor. Half an hour later I’m in disco heaven.  I’ve even forgotten that cruel Hilary Clinton cut. But, suddenly, bobbing above the crowd, like a large, hairy, lunar orb is the ear-to-ear grinning face of the Viking giant from Onkel Donald’s.

I drop to my knees, crawl through the forest of bopping knees to the door and escape onto Universitetsgarten.

Described as a small, very rock n’ roll bar, where loud music precludes conversation, Last Train sounds like just the place to end my night. I order another Jarlsberg, settle in a corner, smile and listen. I’m starting to mellow out into that end of a great evening kind of mood. It’s short-lived. At the bar I spot the VG again. There’s no escape this time and furthermore, he’s seen me and is bearing down on me, white teeth framed in a delighted wide ring of fuzz.

“Beer Guard” he says “I’ve been trying to find you!”

“Ja, Come to my apartment for Nachspiel”

I’ve read about this end of night, post outing drinking-party, equivalent of the Vorspiel and it sounds like a nice idea but not with an unknown, sloshed Viking giant

“That’s very kind, but first would you mind guarding my beer?”

He nods happily. I plant my half full glass on the table, smile gratefully, walk swiftly to the door and head back to Karl Johans and the sanctuary of the Grand Cafe where I enjoy my Nachspiel, with a few last Ibsenesque stragglers from the National Theatre.