With its magnificent castle, its beautiful bridges, its stunning squares, its spectacular public buildings, its imposing towers, its old towns and its vibrant squares, its easy to overlook Prague’s quiet little streets. While you may be consumed by epic stag do ideas during your visit to the city, it’s worth taking the time to wander through the quite streets to discover some of the city’s loveliest houses and some of its most fascinating history.

Depending on your approach, Nerudova Street curves gently down or steeply up the hill below Prague Castle. 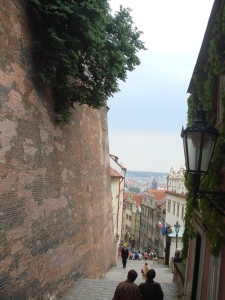 It takes its name from Czech poet and journalist Jan Neruda, who immortalized the district in his short stories He lived here, between 1849 and 1857 first, in number 47, or At the Two Suns and later in number 41, At Three Black Eagles where he wrote his first collection of poems.

Although Nerudova Street attracts crowds of tourists with its quaint shops and cafes and restaurants, it is most famous for its “house signs”. Before the introduction of house numbers in 1770, all Prague houses were distinguished by picturesque signs. Today they tell the history of the house and the people who lived in them.

At the Three Fiddles or number no. 12 was once the home of three very successful violin-makers who sold their instruments all over Europe. Legend has it that on quiet nights the house echoes with the haunting strains of violins. At the Red Lion, or number 41, a red lion holds a golden cup in his paw. This was the home of Petr Brandl, the famous Czech painter work adorns several Prague churches.

At the Golden Lion, or number 32, holds the National Museum’s Historical Pharmacies exhibition. The Golden Horseshoe is at number 34 and At the Red Eagle at 36. The Green Lobster is at number 43 and The White Swan is at number 48.

Steeped in small stories, lined with beautiful little buildings and full of surprises, Nerudova Street is a wonderful wind down from the overwhelming might and splendour of Prague Castle.

Quaint and vibrant Celetna Street leads from the Old Town Square to the Powder Tower. It was once part of the Royal Route followed by the Czech Kings up to Prague Castle. The name Celetna derives from the traditional plaited bread rolls which were made in its bakeries for centuries.

Today Celetna Street is a popular tourist spot. Crowds stroll in its shade by day and in its romantic light by night. It is lined with souvenir shops, cafes and restaurants.

Still, it is the historic houses, marked by picturesque “house signs” which give Celetna Street its distinctive character and charm. The Sixt House, number 2 and At the Three Kings, number 3, are both former homes of Prague’s most famous writer, Franz Kafka. Josepha Duskova, Mozart’s mistress, once lived at number 8, At the Black Sun.

The Manhart House, at number 17, was once a Piarist College but now houses a theatre At the Vulture, number 22, was one of Prague’s early breweries but since the 18th century it has been part of Charles University. At the Four Columns, number25, was the home of Theologist Bernard Bolzano. The Buquoy Palace at no. 20, also now part of the Charles University, is a Neo Classical gem. At The Black Madonna, which was the first cubist building in Europe, is the street’s most famous house. It now houses a permanent exhibition of Czech cubism and its Grand Orient Café sells special cubist cakes.

For history buffs, lovers of architecture and romantics, a stroll down Celetna Street is a must.