Is there anything worse than a long wait between planes?

You’ve come halfway round the world but you’re only half way home. You’ve zipped from day to day, night and sleep have vanished between time-zones, it’s too late for a hotel but too early for tours and anyway, you’re broke and exhausted. You’re suspended in airport purgatory and deliverance via your onward flight is an infinity of empty hours away. 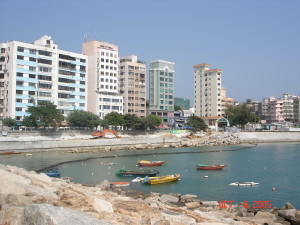 At 5 a.m. Hong Kong International Airport was dead. The departure lounges were deserted, the shutters were down on the shops and the corridors echoed with the creak of empty people movers. Even the airport turnstiles seemed to have been deactivated.

I have always been interested in airport security measures and after doing some research about turnstiles on my phone, I found out that these are inexpensive and widely available.

At this time there were no bustling crowds to control.

I had 19 hours before my midnight flight.

I killed the first hour in the restroom, alone but for one hovering cleaner, masked and gloved like a surgeon.

Outside, at 6 a.m the Travelex booth was ablaze with lights. A morning-fresh face beamed from behind the counter.

“Would this be enough for a day at HKIA?” I asked, sliding my last euros across.

My words hung foolishly in a long silence.

“That depends,” said fresh-face finally “on what you want to do”

“Make friends, fall in love, build a monument, something like Tom Hanks in Terminal” I thought, gesturing vaguely down the concourse.

“Yes!” she snapped with conviction and counted out $500HK.

Behind us the shutters rattled up on the bookshop. Good! Nothing like a bookshop to fill time! An hour later with the store’s cheapest, fattest novel under my arm, I headed for the mezzanine café.

Newspapers and laptops opened around me as I sipped a slow latte with an extra shot. Below, benches filled with people, queues snaked backwards from desks, the trickle in the corridors swelled to a stream and buggies of uniforms zoomed to and fro. It was nine o’clock and the airport was wide awake.

I, however, was ready for sleep. I headed for some chaises longues I’d spotted earlier. Gone! As miffed as Baby Bear, I took in six slumbering forms. Then, like Goldilocks, I zig-zagged through the airport, trying chair after chair; first the red and yellow tubs – too low! next the leather buckets – too high!; then the blue benches – too narrow! Finally, I fell upon the loungers in the ‘resting area’. After an hour my spine was curled like question mark – Too hard!

I limped towards the distant duty free shops. I’d window-shop until I was impervious to low, high, narrow and hard – until I dropped.

The big fat book was dead weight now. An orchestra and chorus struck up in my head “On and on I walk at day break, I cannot touch the green, green grass of home” they screeched.

Ahead, on a poster, a woman smiled into a shower. “Travellers’ Lounge’ said the words below. I followed a trail of arrows to the left. Soon I was gazing through a glass wall at glowing lamps and deep armchairs where people dozed in stockinged feet. Beyond them others browsed at a buffet. With my last dollars I bought salvation – a shower and ten hours worth of unlimited buffet, internet and armchair.

At 11.am. I was that woman in the poster. At midday I was one of those browsers at the buffet. At 2pm I sank into one of those deep armchairs. It moulded itself around me. Sleep came swiftly.

It’s almost time to go now. My flight is at the top of the Departures Screen. Deliverance is at hand. And my advice to any other tortured soul trapped in that purgatory between planes, is, don’t suffer – buy your way into Travellers’ Lounge. It’s Heaven!