80 kilometres west of Paris in the region of Haute Normandie, lies the tiny village of Giverny.

It was here, at Giverny, in 1883, that Claude Monet began to establish the beautiful garden that features in so many of his works. The most famous of these are his water lily and Japanese bridge paintings.

Monet lived and worked at Giverny until his death in 1926 and he lies buried, along with many members of his family, in the village graveyard.

The house and garden were opened to the public in 1980. Art afficianados can steep themselves in the ambiance of Monet’s studio enjoy the same views represented in his paintings. Garden lovers can draw inspiration from the vast arrangement of plantings.

Despite the endless chain of tourist buses that discharge crowds here every day, there is always a tranquil spot to be found here where one can enjoy nature in solitude.

Until half-way through the 17th century, Versailles was a tiny village in the countryside outside Paris. It was site of the royal hunting lodge and although, as they were keen hunters, the French regents “camped” there frequently, it was hardly a fitting place for the Kings’ court.

But in 1642, Louis XIV, also known as the Sun King, set up residence at Versailles and began the process of transforming the humble hunting lodge into the larges and grandest palace in the world.

The magnificent Palais de Versailles was designed by the architect Louis Le Vau and its hundreds of splendid rooms were sumptuously decorated by the interior designer Charles Le Brun. One of the most striking rooms is the Galerie des Glaces or Hall of Mirrors, a fairy-tale ballroom designed to reflect and multiply the dazzling King and his courtiers. Surrounding the palace are 800 hectares of parkland and gardens, laid out in the contemporary French Garden style by the landscape designer André Le Nôtre. They include avenues of trees, parterres of flowers, manicured lawns, fountains and sculptures. One of the most impressive features of Versailles is the geometric layout of the entire complex, including buildings and gardens with the Sun King’s bed chamber at its heart.

The Royal Court was officially established at Versailles on May 6, 1682. By keeping his Ministers, Advisors, Provincial Rulers and Courtiers close to him, dependant on him and more or less cut off from the outside world, Louis XIV kept them powerless and loyal. Strict rules of etiquette kept control at Versailles The epitome of this was the “lever” which required an attendance of courtiers every morning when the Sun King rose from his bed. All at Versailles clamoured for the privilege. Breaches or negligence of protocol, lack of deference or a mere fall from favour meant banishment and to banished from the court was to be banished from the sun and from life. Sometimes it simply meant death.

Versailles remained the seat of absolute power until the French Revolution in 1789, when Louis XVI, his wife Marie Antoinette and their children were forced to return to Paris

Versailles is important, historically, as a symbol of the Absolute Monarchy of the Ancien Regime.

The French are famous for their flair. They seem to be able to add a touch of artistry to anything, no matter how challenging.

In the Rue Des Halles in Paris, Julien Aurouze runs a pest extermination business. Wiping out rats, mice, cockroaches and all the other vermin that haunt our houses is a ghastly, gruesome job. These repulsive pests hardly bear thinking about, let alone looking at. Yet, in Julien Aurouze’s shop window rodents and insects are arranged with such artistry and flair that they’re compelling and even in a strange, ghoulish kind of way, pretty. 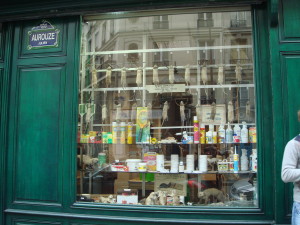 Julien Aurouze’s Destruction des Animaux Nuisibles in Rue Des Halles are indeed proof that the French can add flair and artistry to anything.

Paris architecture is uniform, proportioned, restrained and where there are flourishes of extravagance, they serve to highlight and underline the harmony of the whole.

Even nature in Paris is organised and ordered   – straight lines of trees and parterres with patterned plantings fill the parks.

Generally here is nothing jarring or glaring in the Paris landscape.  There is however, the odd aberration. I found the American Dream Multiplexe, in a beautiful little backstreet near the Opera some years ago. It stood among its nineteenth century neighbours, bold and brash, a riot of modern pop symbolism, a loud, unruly blot on the quiet, ordered streetscape – an American Dream in Paris.