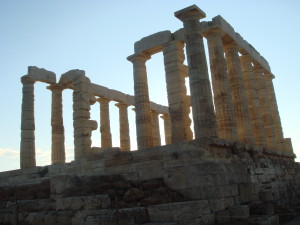 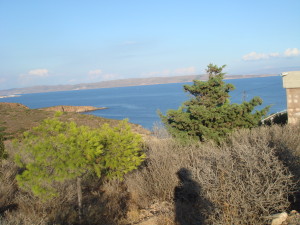 The road which runs along the coast from Athens to Sounion is punctuated with lovely seaside towns, each with its own special character.

Beyond Vouliagmeni, there’s Varkiza. Its folds of sheltered coves are tucked out of sight below the road, so ease up as you approach or you’ll miss it.  Unless of course, the lines of parked cars tempt you to stop and check out exactly what they’ve stopped for!

As in Vouliagmeni, Varkiza beaches are both “free” and “private” so you can either pay 6 to 8 euros and languish in a deck chair, or lounge for zilch on the sand. Either way, you still swim in the same clear blue waters and enjoy the same sweeping views out across the Aegean Sea.

Varkiza is the area’s premier windsurfing spot. Not only does it offer a stunning natural setting for the sport, with fabulous views both out to sea and back to shore, it also boasts the best facilities. Favourable breezes go, of course, without saying!

Like Glyfada, Vouliagmeni or anywhere along this coast, the seaside experience is complemented and enhanced by the culinary experience. The perfect Varkiza day finishes in one of the local taverna, overlooking the Aegean, savouring the local seafood and sipping on an ice-cold Mythos.

East of Glyfada but still in the shadow of Mount Hymettus, lies Vouliagméni.

With their golden sands and turquoise waters, the beaches of Vouliagmeni rank among the most beautiful in the Mediterranean. Many, including the famous Astir, (home of the late Jackie Kennedy’s favourite resort) are private. Although this sounds exclusive it really means that, for about 8 euros, anyone can colonise a deck chair and avail themselves of the facilities and services. For nothing at all, though, you can swim at a public beach (equally beautiful) lie on your towel, do without facilities and services, mingle with the locals and still have a great day out.

Just a five minute stroll from the town square, is Vouliagmeni Lake. Formed by mineral springs which bubbled up from underground to fill an ancient limestone cave, the lake is famous for its soothing, healing waters. It’s heaven, they say, for sufferers of arthritis and rheumatism and it also takes the sting out of an overdose of sun!

Vougliameni also boasts a Marina full of classy yachts and a collection of glam hotels and resorts. There are great cafes, restaurants, tavernas and clubs in Vouliagmeni. The nightlife, especially in summer has a buzz all of its own.

One of Vougliameni’s loveliest spots, however is its picturesque harbour with its view out over the distant islands of the Saronic Gulf.

Sheltered by Mount Hymettus on one side and bordered by the Saronic Gulf on the other, Glyfada is one of Athens’ most beautiful, lively and desirable suburbs. Whether you’re shopaholic, a café aficionado, a party person, a greenie, a beach bunny or a soul in search of the simple seaside life, you’ll find your niche in Glyfada.

For shoppers, Glyfada is  paradise,  with a line-up of local icons  like Kokkoris (for eyewear addicts) Ensayar (for brand afficianados) and Zer Teo (for exquisite jewellery) as well global giants like Zara and Mango.

Elegant cafes, restaurants and bars abound in Glyfada. All along the waterfront are brilliant open-air nightclubs which rock the place on summer evenings.

With a state of the art “green” tramway which features a carpet of grass between the tracks and a central pedestrian zone, Glyfada shopping, dining and clubbing is an easy feat.

The very best of Glyfada, however, is down on the beach during sunshine hours. There are miles of golden sand, a stretch of blue water, views of an off-shore island, fishing boats chugging in and out and fishermen selling their catch fresh from the sea.

What makes Glyfada so special, so attractive, so stimulating and so comfortable is its perfect balance of 21st century glam and timeless simplicity.