Aptly named Museum Korut or Museum Street,  which curves away from the Danube in Pest,  is home to two of Hungary’s great Museums. 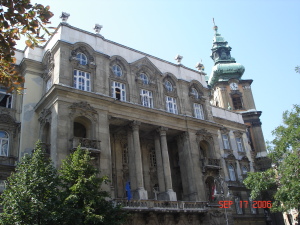 The Hungarian National Museum, founded by Ferenc Szechenyi  in 1802, houses an exhibition illustrating the history of the Hungarian State from its foundations to the 20th century. It includes displays of jewels, craft work, furniture arms and armour, paintings, garments, posters, films and even a piece of the Berlin Wall. St Stephen’s crown, coronation mantle, royal scepter, orb and sword, which were smuggled to Germany at the end of the war and eventually returned to Hungary by the US in 1978, are on display. The neo-classical museum building is as impressive as its contents. Designed by the Viennese architect Mihaly Pollock it has a vast pillared hall hung with massive chandeliers and wide sweeping staircases.

The Museum of Applied and Decorative Arts, built at the turn of the 20th century by Odon Lecher is also an architectural marvel. Inside is an amazing display of Hungarian handicrafts from ceramics to leatherwork and marquetry.